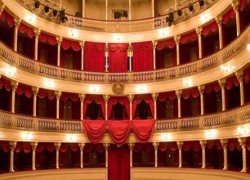 On its 5th edition, the ‘Madeira Literary Festival’ is taking place in the Baltazar Dias Municipal Theatre, Funchal, Madeira Island, from March 16 to March 22.

One of the most significant cultural events on the island, the festival attracts local and international writers, poets and literary critics generating a wealth of ideas and cultural exchange.

The festival will open with a conference by Eduardo Lourenço – a distinguished Portuguese essayist, professor, critic, writer and philosopher -, and closes with a conference by Alberto Manguel, the Argentine-born Canadian essayist, novelist and editor known for his literary anthologies on a variety of themes or genres.

As in previous years, the festival will feature the launching of new books and presentations of conferences and debates on different literary topics. The festival also offers musical performances by prominent artists, including a concert by composer Rodrigo Leão, with fado vocalist Camané, scheduled for March 14.

Madeira (population, 270,000), together with the island of Porto Santo, were known to the Romans as the ‘Purple Islands’ rediscovered (1418–20) by Portuguese explorers João Gonçalves Zarco and Tristão Vaz Teixeira.  In 1976, following the democratic revolution of 1974, Portugal granted political autonomy to the Madeira archipelago. As defined by the Constitution of Portugal, the ‘Autonomous Region of Madeira’ has its own government and legislative assembly. Madeiran immigrants in the United States are concentrated mostly in the New England and Mid-Atlantic States, Northern California, and Hawaii.