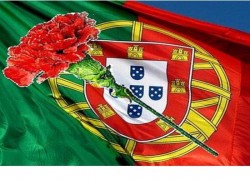 The revolution of 25th April 1974 transformed the political and social set-up and gave great hope to the people of Portugal. Thirty-nine years on, hope is in short supply. It has evaporated in the face of the intractable economic crisis. What has gone wrong?

During the decade before 1974, the country was still relatively underdeveloped with poor infrastructures and inefficient agriculture, but growth rates for GDP were among the highest in Europe. By 1973, the on-going colonial wars were exacting a heavy toll in terms of financial cost and in promoting mass emigration among the better educated and most technically skilled who wanted to avoid conscription.

The ‘Carnation Revolution’ replaced dictatorship with democracy. It also led to a succession of economically inept governments and a litany of mismanagement, corruption and greed that has brought the country to the edge of bankruptcy.

In the aftermath of the military coup, the nationalization of banks and industries and the expropriation of agricultural estates led to collapse across all sectors of the economy.

The 1980s saw a return to economic and social stability of sorts. After joining the European Union in 1986, trade ties increased, structural and cohesion funds flowed in, and tourism took over from farming and fishing as the main economic activity in the south of the country.

Living standards continued to rise and prosperity spread among an expanding middle class in the 1990s. On 1st January 2001, Portugal adopted the euro. In the five years that followed, household debt expanded, unemployment increased and GDP growth dropped to the lowest of any country on the continent. 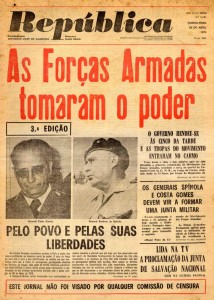 Front page of “República” on the day of the Revolution.

At the beginning of 2010, Portugal joined Italy, Ireland, Greece and Spain in a full-blown debt crisis that the Socialist government of José Sócrates was unable to bring under control. One of its last acts in 2011 was to apply for a bailout from the International Monetary Fund and the European Union.

As the center-right government of Pedro Passos Coelho struggles to repay the €78 billion bailout, a need for a second mega loan may be looming. Some analysts insist Passos Coelho has lost his way in a mission impossible – that the debt burden is such that Portugal will never be able to pay it off. If that is the case, what is point of trying?

Among those who hold that opinion is Mário Soares, an arch critic of the dictatorship who rose to prominence immediately after the revolution. The former Socialist leader and now elder statesman said recently in a radio interview: “No matter how much [the government] impoverishes people or steals from their pensions, the state will never be able to pay back what it owes. When you can’t pay, the only solution is not to pay.”

Before the Carnation Revolution, people all across the country were restive and hungry for change. They are again. Contempt for authority is being fuelled by the collapse of many businesses, rising costs and austerity measures that are impacting on education, employment and health, causing widespread suffering, especially among young families, the elderly and the poor.

Portugal could be on the verge of another pivotal transition. It is unlikely to be as dramatic as a military coup. It is the people not the army who are in the forefront of the demand for change this time.

Amid the current paucity of hope, street protests in what is being described as a “historic day of struggle” are planned for May 1.

Other posts by Len Port: