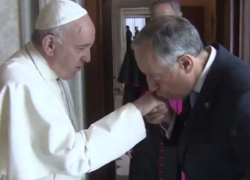 Pope Francis will travel to Lisbon in 2023, for the World Youth Day, the President of Portugal Marcelo Rebelo de Sousa revealed today, after a private audience in Vatican City with the Pontiff.

President Rebelo de Sousa, a practicing Catholic, was received in a private audience by Pope Francis in the Vatican, following the tradition of five years ago, when he also visit to the Holy See.

The President of Portugal took office for a second five-year term, on an official ceremony on Tuesday, following the presidential elections on January 24.

Speaking to the press in Rome, Marcelo Rebelo de Sousa revealed that the meeting “went very well” and that they talked about the Pope’s historic visit of to Iraq early in the week. The President also stated that Pope Francis will be visiting Fatima at the time of his trip to Portugal.

“During the visit, the President’s first foreign trip since his re-election, satisfaction was expressed at the good relations between the Holy See and Portugal, as well as the contribution made by the Church to the life of the country, with special reference to the management of the current health crisis, the defence of life, and peaceful social co-existence,” Vatican News reported.

In January 2019, The Portuguese President participated in Panama in the World Youth Day, with Pope Francis, when it was announced that the next event would take place in Lisbon in 2022. The announcement was made at the closure of the 2019 World Youth Day, before a crowd estimated at 700,000.

However, due to the COVID’19 pandemic, Pope Francis had to cancel the pastoral visit to Lisbon,  in 2022. The event was then postponed to August 2023.

The World Youth Day, the largest international event organized by the Catholic Church, is held annually at the local (diocesan) level on Palm Sunday (or on a date defined by each diocese), alternating with an international meeting every two or three years, in a large city. The international editions are a weeklong religious and cultural event that brings together hundreds of thousands of young people from around the world.