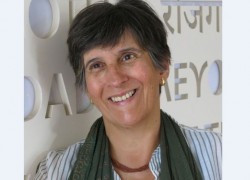 Professor Cordeiro will teach “Cultures of the World: Portuguese Society Culture” in the Department of Sociology and a seminar titled “The Portuguese-speaking World and Its Diaspora in Massachusetts” in the Honors College. Both courses will count toward the minor in Portuguese Studies.

Professor Índias Cordeiro is director of the doctoral program in Urban Studies at ISCTE-University Institute of Lisbon and an affiliate of the Center for Research and Studies in Sociology. She is the author, editor or co-editor of eight books, and has been guest editor of eight special issues in academic journals in her field.

She has published over sixty book chapters and peer-reviewed articles, and has been visiting professor at universities in the United States, Spain and Brazil. Her research focus is on social classifications, language and ethnicity, street and neighborhoods, and urban social history.

In recent years she has conducted research in Boston on the Portuguese-speaking the intersection of language, ethnicity, and place in Portuguese-speaking communities, which has resulted in essays such as “An Immigrant in America, Yes, But Not an Emigrant in My Own Country! The Unbearable Weight of a Persistent Label,” in New and Old Routes of Portuguese Immigration (at press), “Neither Slum nor Élite Suburb: The Emergence of a Portuguese Colony in Cambridge, MA, in the early 20th century,” in Migration and Mill Work: Portuguese Communities in Industrial New England (at press), and “Belongings and Interactions: Negotiating Portuguese-speaking Identities in Boston,” in Portuguese Literary & Cultural Studies 26 (2014). During her tenure at UMass Lowell Prof. Indias Cordeiro will expand her research into Lowell and environs and promote student research in this region.