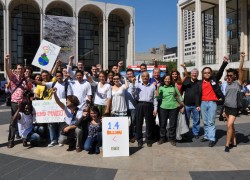 Registration for the 2011 contest is open till July 15.

The MDGs were set in 2000 by the United Nations (UN) to prompt member states and civil society to fight poverty, hunger and disease, inequalities, lack of education and environmental degradation.

Three winners and two runners-up for each category will be selected by an international jury of young ICT experts. They will evaluate the projects in two rounds of online judging.

Winners will have the chance to meet engaged youth from around the world and network with representatives of NGOs, governments and media.

All winners will be invited to the WSYA 2011 Winners’ Events in Skopje, Macedonia, where they will have the chance to present their projects on a world stage. Aside from the award ceremony, meetings, discussion rounds and workshops will provide the space to exchange ideas and make friends with engaged youth from all continents.

Representatives of governments, NGOs, media and other renowned experts in the field of ICT for Development will take part in these events and be available to the winners.

The WSYA selects and promotes best practice in e-content and new media, demonstrates young people’s potential to create outstanding digital content, and serves as a platform for people from all United Nations member states to work together in the efforts to tackle poverty and hunger, ill-health, gender inequality, lack of education, lack of access to clean water, and environmental degradation.

The Youth Award is promoted in all United Nations member states through the networks of the World Summit Award (WSA), the UN Global Alliance for ICT, other UN Organizations and Agencies, governments and NGOs, youth organizations and all those committed to making a real difference in the achievement of the MDGs.