2011 Renewable Energies in the Azores – Conference 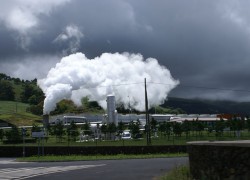 The Assembly of European Regions (AER), headquartered in Strasbourg, France,  is organizing a conference and study visit on renewable energies on  27 May, 2011, in Ponta Delgada, São Miguel,  Azores.

The meeting will include presentations of good practice cases from the Azores and a visit to the geothermic park of Ribeira Grande, which produces 52% of the islands electricity.

In 2009, a protocol was signed between the Regional Government of the Azores, the Foundation for Science and Technology, MIT Portugal and the University of the Azores, with a view to implementing the Green Islands Project.

According to the project, several sources of renewable energy in the Azores will be explored, which includes solar power, wind power, water power, geothermal and biomass power, as well as the production of energy from waves and maritime currents.

The objective is to increase electricity production based on Renewable Energies, whose weight will represent 52% of total production in the Azores until 2014.

AER, founded in 1985, is the largest independent network of regions in wider Europe, bringing together more than 270 regions from 33 countries and 16 interregional organizations.