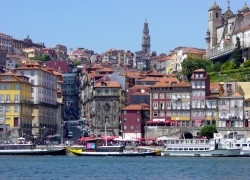 The Portuguese northern city of Porto, the second largest city in the country, was elected Tuesday the “Best European Destination 2012” winning the title over 19 major European cities.

Sponsored by the Tourism Offices across Europe the voting was carried online involving multiple social networks and a total of 212.688 voters.

Porto offers a variety of resources and historic authenticity to its visitors. Discovering Porto means discovering what makes it different: the famous Port Wine, an Historical Center designated World Cultural Heritage by UNESCO, Museums, enchanting parks and gardens, according to the European Travelers Choice.

Lisbon, the winner of the tittle  in 2010, was voted 8th place in the contest. The other top best destinations for a holiday or city-trip in 2012 included Dubrovnik, Vienna, Prague, Brussels, Berlin, Budapest, Florence and Edinburgh as the most voted destinations after Porto.

In 2010, Porto had won 4th place among the 10 top best value 2012 world destinations by Lonely Planet the largest travel guide book and digital media publisher in the world.

Porto,  population 237,559 (2011),  has undergone a remarkable renaissance in the last two decades. At the mouth of the Rio Douro, the hilly city  presents a diversity of styles from narrow medieval alleyways to extravagant baroque churches, romantic little squares and wide modern boulevards.  A millenary city, Porto is also internationally known for exporting the famous Port wine.

European Consumers Choice is an independent non-profit-making organization based in Brussels created to recognize companies skilled in producing innovative and intelligent designs for easy to use products. European Consumer Choice in partnership with tourism offices also rewards the best holiday destinations in Europe.

European citizens vote online to select their preferred destination and the town which receives most votes (over a period of 21 days) is awarded the trophy for best European destination (Lisbon 2010, Copenhagen 2011). Every year our jury and partners in the field of industry, design, tourism and the specialized press select products on the basis of their originality, innovative features and exceptional qualities.