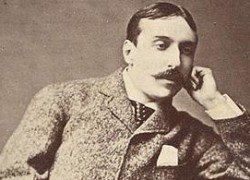 A new edition of the novel, The Relic, by Eça de Queirós, was published by Tagus Press at UMass Dartmouth in in partnership with the University Press of New England (UPNE).

Translated into English by Aubrey Bell, and originally publish in 1925, by Alfred Knoft, the book was out of print for many years.

Eça de Queirós began to work on The Relic  [A Reliquia] in 1880.The book, containing several sacrilegious passages, was published in 1887.  The epigraph reads “Sobre a nudez da Verdade o manto diáfano da Fantasia” [Over the powerful nakedness of Truth, the diaphanous look of Fantasy].

Following Eça’s death, these were the words engraved on his statue erected in Lisboa’s Chiado in 1903. The statue, showing the author embracing “Truth”, represented by a young female, is the work of Portuguese sculptor Teixeira Lopes. 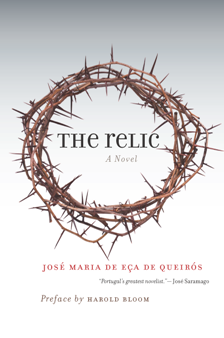 Narrated in the first-person, the book follows the life of Teodórico Raposo on his undertakings to inherit the fortune of his overzealous Catholic aunt, Dona Patrocínia das Neves.  A lower middle class character, Teodórico is a bohemian student in Coimbra. When visiting his aunt in Lisbon, he plays the part of a decorous young man. He accompanies her to church, but his devious mind is more interested in the women surrounding him. Overcome by sexual obsession, at nigh he sleeps with Adélia, a prostitute who is deceiving him with Adelino.  Learning of Paris’ libertinism from a friend, he pleads to his aunt to send him there on a pilgrimage to the city’s holy shrines. She sends him to Palestine instead, where he picks up a sprig of thorns and makes a crown –the relic – a gift intended for his aunt. Upon his return from the Holy Land, Dona Patrocínia dies living him destitute.

The The Relic  is a provocative, critical account of the hypocrisy of the Catholic Church of Queirós’ time. It portraits religious fervor, contrasting the gentleness of Jesus of Nazareth against the ruthless of the Church’s God.

Eça de Queirós  (1845–1900) is considered one the greatest Portuguese language writers of all times, credited with having introduced naturalism and realism to the Portuguese literature. One of the most important literary figures in 19th century Europe, he has been compared with Dickens, Balzac, Flaubert and Tolstoy and referred to as the Portuguese Zola. His work, translated in many languages, makes him one of the major novelists of his generation.  A traveler and a diplomat he died of tuberculosis in Paris on August 16, 1900.