Alentejo: On their way to far-off picking fields – By Len Port 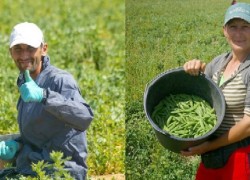 A foreign community of workers employed by a Danish company has just come to the end of another season of harvesting a specialized crop in Portugal. They are now on their way to picking fields in Denmark.

Since the beginning of March, more than 100 workers from various European countries, mostly Romania, have been picking peas close to the west coast of the Alentejo.

They are not ordinary peas for cooking. They are small, sweet peas eaten in Denmark directly from the pods at any time of the day as a snack. The Danes devour hundreds of tons of them every year.

The company, GreenPeas, employs men and women able to work hard in the open air and show a high degree of self-motivation, flexibility and fellowship. The jobs are open to all nationalities. Not many Portuguese apply or stay on the job for long, but a few are in the team going to Denmark.

The pickers are not only in it for the money. The job offers a convivial social life and the recreational attractions of two countries they might otherwise not get to visit.

“In GreenPeas you are not working in a traditional way,” says Brian Knudsen, who oversees operations here. He places great importance on the moral dimension. “It’s essential that we trust each other, that we have mutual respect and behave as equals,” he says.

Instead of bosses lording it over things, group decisions are made by discussion and agreement. Phillipos Dimarilis, a Greek who started out as a picker for the company ten years ago and now has a coordinating role, explains that he is always open to suggestions. “When I’m deciding what part the fields to move on to, pickers will sometimes come up with a better idea and we talk it over.”

Ten years ago pickers from richer European countries were free spirits looking for adventure. Now more than ever it is about money and, of course, the bureaucracy has been cranked up. 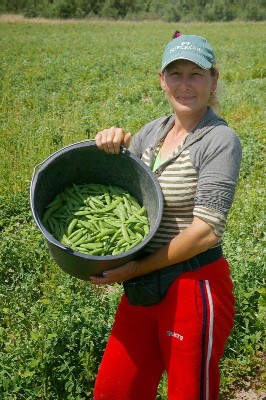 Operations in Portugal as in Denmark are conducted within a very transparent framework that adheres closely to the legal, commercial and social requirements of both countries, says Peter Skov Johansen who founded GreenPeas in Denmark 40 years ago.

Last year, which was just the second year of operations in Portugal, he had a fallout with officialdom in Santarém but relations with the various relevant authorities based in Beja this year have been good.

The work and living conditions in Portugal and Denmark differ. From the beginning of March to the end of May the workers pick in fields in the Alentejo and live in fully equipped apartments or hotel accommodation. From June to September near Nyborg in central Denmark they live under canvas.

The job is not easy and the pay is not great. The pickers arrive at the fields at sunrise and work eight-hour days, six days a week. In Portugal they earn a minimum gross of about €650 a month all inclusive, with the opportunity of bonuses for those who pick more than a basic required quantity. The same applies in Denmark, except that only very skilled and specialized pickers – who are able to achieve the high Danish minimum salary of about €17 an hour by piecework – will be allowed to stay.

In talking to a number of Romanians working along the vast rows of peas in the fields of the Alentejo last week, Aurelian Iordache, 39, who has been picking for six years, told me that he and his companions had to pick with their eyes as well as their fingers. This is to ensure they collect pods of just the right size and ripeness, “otherwise the shoppers in Denmark will not buy them.” 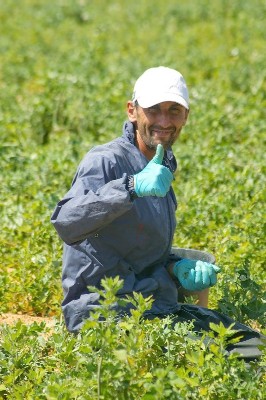 The workers kneel on padded knees and move slowly forward picking from the rows of plants on either side. A few pickers talk with those around them, most are silent. Some let their minds wander, others listen to music through earphones, but their eyes stay focused.

Eugen Ciornei, 38, said that after eight months he was happy with the work and living conditions in Portugal and that he had made good friends here. “The payment in Romania is not so good. The minimum salary there is about €200 a month and here it €600” He is looking forward to his first trip to Denmark. “I’ve never been there so I don’t know what it’s like, but I can adjust anywhere,” he said.

Several rows away, his wife, Loredana, 36, was full of smiles but didn’t stop picking when asked about community life. “The work is hard but it’s okay. The people here are nice.” She sometimes goes fishing on the nearby beach or partying in the evening. She admitted missing her 11-year-old-son who is being looked after at home by her mother, “but I talk to him every day on Skype.”

Brian Knudsen believes the sweet peas grown in Portugal are the finest in Europe. Nearly each season’s entire crop goes to Scandinavia, mostly Denmark. The company also exports around 40,000 kg of peas for cooking to the UK.

The future of the export trade is dependent, however, on precise timing in terms of growing, picking and transporting to ensure the optimum level of ripeness and freshness when the peas reach their market, a 55-hour non-stop drive to the north.

Profit margins are vulnerable because the spring weather in Portugal is less predictable than the summer weather in Denmark. It was at times wetter and warmer than usual in the Alentejo in recent months. This has complicated things. It has raised doubt about viability and whether GreenPeas can continue production in Portugal as scheduled, from September to Christmas this year and again from March to June next year. They hope so.