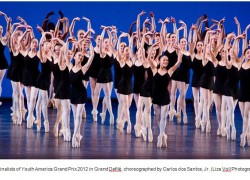 Valentina is a student at The National Conservatory Dance School [Escola de Dança do Conservatório Nacional] of Lisbon, Portugal.

The competition is held annually around the world and in New York City, and is open to dance students of all nationalities 9-19 years old.

In its 13th Season, YAGP has awarded over $2 million in scholarships to the leading dance schools worldwide. Over 25,000 dancers worldwide have participated in YAGP’s international workshops, competitions, and audition classes.

Established in 1999, Youth America Grand Prix (YAGP) is the world’s largest student ballet scholarship competition that awards over $250,000 annually in scholarships to leading dance schools worldwide. The 2012 YAGP Finale was held in April, at the Linclon Center, New York City.