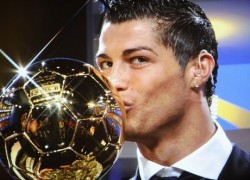 Portuguese footballer Cristiano Ronaldo was nominated among 23 finalists for the 2011 FIFA Ballon d’Or award, the football’s global governing body announced Tuesday. He was awarded the Ballon d’Or award for the first time in 2008.

The award is a combination of the FIFA World Player of the Year accolade and France Football Magazine’s Ballon d’Or.  Barcelona forward Lionel Messi, also nominated, won the FIFA Ballon d’Or last year, the first time the two awards were combined. Messi and Ronaldo are the favorites to claim the award again this season.

Portuguese natives José Mourinho and André Villas-Boas are among the 10 coaches nominated on the 2011 FIFA World Coach of the Year shortlist.

Cristiano Ronaldo , a native of Madeira island, is a Portuguese footballer who plays as a winger or striker for Spanish La Liga club Real Madrid and is the captain of the Portuguese national team. He won world player of the year in 2008. Ronaldo became the most expensive player in football history after moving from Manchester United to Real Madrid in a transfer deal worth £80 million (€94m, US$132m).

2011 FIFA World Coach of the Year for Men’s Football:

The short list will be dwindled down to three finalists to be announced December 5. The winner will be revealed January 9, when the award for coach of the year will also be announced.