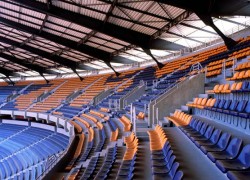 American vocalist Madonna is launching her 2012 world tour with a performance scheduled for June 24 at the Estádio Cidade de Coimbra, Portugal.

Fifty thousand tickets will be available for sale starting February 11. The tour, her most extensive tour ever in terms of number of dates, will follow the release of Madonna’s new album “MDNA,” due March 26.

Twenty-six shows are planned for North America, including a September 6 show at New York’s Yankee Stadium, and performance at the Staples Center in Los Angeles scheduled for October 10. The entire tour will end up with close to 90 shows, which would be the most ever for Madonna.

Madonna has performed in Portugal before in 2004 at Pavilhão Atlântico; in 2005 at the MTV European Awards in Lisbon, and in 2008 at Parque Boa Vista also in Lisbon.

The Estádio Finibanco Cidade de Coimbra was inaugurated with a Rolling Stones concert on 27 September 2003, attended by over 50,000 people. The stadium was designed by the Portuguese architectural firm Plarq in association with KSS Design Group of London. The Plarq team was led by the architect António Monteiro.