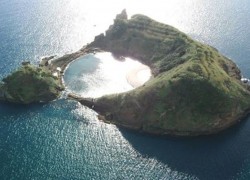 The third stop of the 2012 World Series Red Bull Cliff Diving competition will take place Saturday, July 21, on the São Miguel island, in the Azores.

Two dives will be performed by 14 athletes from 11 different countries, straight from the rocks off the small islet of Vila Franca do Campo.

Diving directly off the cliff allows the athletes to perform their two required dives directly from the rocks in a very special moment for the divers as well as the spectators.

Divers jump from a platform at a height ranging from 26–28 m. Competitions are held in a limited number of venues across the globe.

Classified as a Nature Reserve, the islet of Vila Franca do Campo is the  remains of a collapsed underwater ancient volcano which erupted off the cost of the island. The islet is home to many species of birds, crustaceans and flora.

The islet is named after Vila Franca do Campo, the town next to where the islet was formed. This is the first time the seven stop sport event will be held on Portuguese territory.