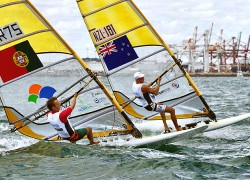 The windsurfer veteran João Rodrigues, from Madeira island, Portugal, is the winner of Perth 2011 ISAF Sailing World Championship. He is the first to win a world championship race at the age of 40.

Rodrigues competed in the RS:X Yellow Fleet Men’s Windsurfer race on the Success course during day 11 of the 2011 ISAF Sailing World Championships on December 13, 2011 in Perth, Australia.

João Rodrigues has already won 22 regattas worldwide. A few months ago, he entered the Guinness Book of World Records by cross the Atlantic from his home island of Madeira to the small Selvagem Grande island, sailing 160-nautical mile to celebrate his 40th birthday.

After more than 10 hours of sailing, at average speed of 18, 6 miles per hour, on a RS: X windsurf board, Rodrigues touched land. “I wanted to call worldwide attention to these small islands. It wasn’t easy. After two and a half hours, I wanted to quit, but we took it mile by mile, step by step,” he said.

João Rodrigues, who started sailing at nine years-old and racing competitively at the age of eleven, holds a degree in engineering from Technical University of Lisbon. He has represented Portugal in 121 international competitions and has won 51 medals.

A very experienced windsurfer and has already conquered the World windsurfing Championships, in Port Elizabeth, South Africa, in 1995.

In the following two years, Rodrigues won the European Championships in the Mistral class. In May 2008, he added a third European title to his record, this time in the Neil Pryde RS:X class.

He is training hard for the upcoming London Olympic Games and will be the ambassador for the European Windsurfing Championships 2012, to be held in Funchal, Madeira, next March.