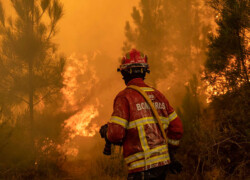 The recent rural wildfire that encroached on the municipality of Portimão in the Algarve was yet another reminder that scientists consider Portugal to be one of the most vulnerable countries in Europe to climate change.

The latest blaze came almost on the third anniversary of the inferno that destroyed so much across the Monchique hills in 2018.

It is clear that the effects of climate change are already being increasingly experienced in this country and they are predicted to get far worse as world leaders disagree and delay on the urgent action needed against global warming.

The heat waves, droughts and sea level rises that have already caused great concern in various parts of Portugal are certain to become much more frequent, intense, uncontrollable and harmful to human activities and ecosystems throughout the mainland, and even in the autonomous island territories of Madeira and the Azores.

Global temperatures have so far risen by what seems like an inconsequential one degree Celsius since pre-industrial times. If the temperature should rise as forecast by just another 1.5 or 2 degrees, it will intensify and elongate heat waves, drastically reduce precipitation and create greater disastrous sea level rises.

Temperatures will rise through all seasons, especially summer when the heat in some places may be become unbearable.

More extreme heat waves will increase the number and severity of wildfires that have been more prevalent in Portugal than any other European country in recent years.

The tourist industry that is so crucial to the Portuguese economy has been crushed by the COVID-19 pandemic and could again see a massive and perhaps permanent drop in business because of searing summers.

Droughts will proliferate in magnitude, cutting supplies of water to ordinary urban households as well as for agricultural irrigation.

The reduction in crop productivity because of less irrigation on dry land will mean that even olive trees will be at risk and the wine industry may struggle to survive.

If the sea levels continue to rise as expected, whole coastal communities will be submerged and wiped out.

None of this seems to worry many of the older generations who may not be around to cope with unprecedented crises in infrastructure, food, health and economic systems. But for future generations so much needs to be urgently done by world leaders at the COP-26 summit in Scotland in November.

It must be emphasised that the reality of global warming is not in doubt: it is based on specialist international scientific research and solid evidence.

The Intergovernmental Panel on Climate Change (IPCC), which is regarded as a highly reliable source of information, consists of more than 1,300 scientists in the United States and many other countries.

Portugal has had to deal with 35% of the Mediterranean region’s forest fires and 39% of the land destroyed by them in recent decades, much more than any other southern European country.

In Lisbon the average summer temperatures may rise from 28 to 34 degrees, with the frequency of extremely hot days increasing from the current rate of five days to about 50 days a year.

That mere 1.0 degree Celsius post-industrial rise is causing increasingly frequent and violent weather conditions. The plan was to limit the rise this century to two degrees, but the 2016 Paris Agreement lowered the aim to 1.5C. That half a degree could make all the difference to the continuance of safe human existence.

The yearly precipitation rates are forecast to decrease this century by between 15% in the north and 30% in the south of the country. The decrease will be least in winter. In spring and autumn rainfall is likely to lessen by about 20% in the north and 40% in the south. Summer rainfall is expected to be down by more than 50% over most of the mainland. In Madeira, about 30% less annual rainfall than during the 1960–1990 period is anticipated for the decades ahead. No substantial change in rainfall is forecast for the Azores.

Scientific projects point to an average sea rise from 0.25 to 2 metres by the end of this century. The most affected of the nine main islands in the Azores will be São Miguel where more than 57% of the population are expected to be at risk.t