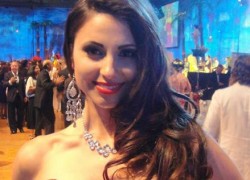 Portuguese-Canadian Denise Garrido, 26, was Miss Universe Canada just for one day before the event organizers realized they had made a typing error on the scoring results.

Garrido, from Bradford, Ontario, had been crowned Miss Canada out of 57 contestants, on Saturday, May 25. A day later, she learned she was actually the third runner up and that the title was given to Riza Santos, 26, of Filipino descent.

According to pageant director Denis Davila, “During the validation of the computerized scoring results (which occurs the following day), a typo was discovered in the top five entries, which significantly impacted the final results of the competition,” it was reported.

“We would like to offer our sincere apology to Denise Garrido for this human error discovered while validating the results. Miss Garrido’s example and grace represents all we look for at Miss Universe Canada. We have no doubt she will continue to succeed in her endeavours and we wish her well. We truly hope she remains a strong part of the Miss Universe Canada Organization,” was stated in a public apology note to Garrido.

Garrido, a biomedical sciences graduate, who has a black belt in TaeKwon-Do and a grade 8 in piano, was left devastated after officials realized the mistake, it has been reported.

Riza Santos, who had represented Canada in the Miss World 2011 competition, will represent Canada at the Miss Universe 2013 beauty pageant in December.