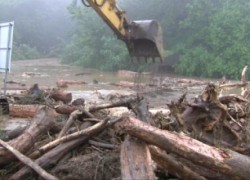 In one home, completely buried, two brothers were killed. In another home, a rescue team managed to get five people out, but one of them, the father, was already deceased. A family of four managed to escape through a window of another house.

Carlos Ávila, the mayor of Povoação, the nearest municipality, told Lusa the landslide was caused by “the enormous amount of rain” that had fallen since Wednesday afternoon. Ávila told reporters the houses were “very old buildings,” over 100 years old, located at the bottom of a slope.

On Terceira island, a creek overflowed in the center of Porto Judeu village causing flooding and damaging vehicles. Overnight, 20 homes were affected and 30 people were reallocated under preventive measures. The center of the village remained impassable Thursday.