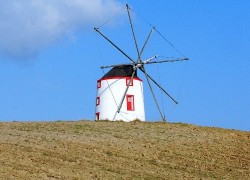 According to the Portuguese Institute of the Sea and Atmosphere (IPMA), starting on Wednesday, Portugal mainland will be hit by a four day long heatwave, with temperatures reaching 113 Fahrenheit or higher across the country.

The above average temperatures are expected to have an impact on public health and fire propagation. The IPMA declared “code orange” the second highest alert warning for the entire territory.

More than 10,000 people have been mobilized to boost control operations in the more fire-prone areas of the country.

Nuno Moreira of (IPMA) warned that on Tuesday that there will be increases in temperature and humidity “well above the usual” with Thursday being the hottest day. He said that airborne dust is expected from North Africa, particularly in the south of the country.

He also stressed that weather conditions could change “rather abruptly” and that the situation of extreme heat should last for at least four days, with the nights being “tropical” since the minimum temperatures will not drop much.

“This year, we have in place the biggest plan ever; 10,700 men and women around the country,” including “voluntary firefighters, police and soldiers,” said Interior Minister Eduardo Cabrita.

Patrícia Gaspar, spokeswoman for the National Civil Protection authority, warned that the weather outlook is severe. “We are reinforcing control operations especially in the most vulnerable zones” by “already prepositioning the means of intervention in the event of fires” she said.

The National Civil Protection Authority is working in articulation with the Armed Forces, the Nature Conservation Institute and the National Guard (GNR) in terms of forest patrols, to prevent fires, said Patrícia Gaspar.

“This plan allows us to gain time in the initial attack phase,” she stressed, adding that this year rescue services have two planes that are currently involved in monitoring operations. She said that the use of fire will have “zero tolerance.”

The situation, according to Diogo Cruz of the Directorate-General for Health, requires the population to take protective measures, such as seeking a cool environment, drinking lots of water, and avoiding alcoholic beverages.

Special attention should be given to vehicles exposed to the sun and paying particular attention to the most vulnerable, such as children, the elderly, people with chronic diseases, pregnant women and people in isolated places, he said.

In June 2017, when temperatures reached values well above average, 64 people were killed in the deadliest wildfires in Portugal’s history. The fires burned for five days in the central region of the country. Many of the victims died trapped in their cars by the flames while trying to escape.

Record high temperatures around Europe this summer have triggered deadly wildfires from Sweden to Greece.