Wallpaper: Porto on the shortlist for Best City 2012 – Portugal 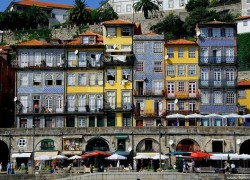 Porto is one of the candidates for the 2012 Best City Design Awards by international Wallpaper magazine, together with London, Berlin, Mexico City and Guangzhou, the publication announced Tuesday. The winner will be announced in February 2012.

According to the magazine, the “downtown cultural life… revitalized by an active student and artistic community” together with its “granite homes,” and its “gastronomic scene” of stunning restaurants with “magnificent views of the ocean and the city,” are some of the reasons to place Porto among the best.

Porto,  population 237,559 (2011),  has undergone a remarkable renaissance in the last two decades, Portugal’s second largest city and one of the largest urban areas of the Iberian Peninsula,

At the mouth of the Rio Douro, the hilly city of Porto presents a diversity of styles from narrow medieval alleyways to extravagant baroque churches, romantic little squares and wide modern boulevards. A millenary city, Porto is also internationally known for exporting the famous Port wine.