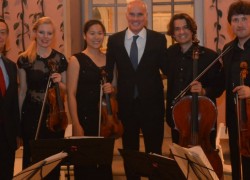 Portuguese diplomat, Ambassador João Vale de Almeida, served as the Head of the Delegation of the European Union (EU) to the United States. His four years of momentous tour began on August 10, 2010 and ended on October 31, 2014.

During this time, he served with a passion for excellence in a turbulent times requiring diplomacy to navigate through serious international challenges.

He is succeeded in Washington by Ambassador David O’Sullivan, who presented his credentials to President Barrack Obama on November 18, 2014, and is currently in Brussels to be posted in New York, later in 2015, as EU’s Ambassador to the United Nations.

As the representative of almost half a billion people and twenty eight (28) countries, he travelled to all fifty US states – reaching out to mayors, governors as well as civic organizations – to make the case for the EU and stronger relations with US.

The Twitter page of Ambassador João Vale de Almeida shows 5,516 followers as of January 24, 2015. It is a very interesting page with valuable information – showing his passion for diplomacy and his home country.

For example, on January 12, 2015, commenting on soccer, he tweeted “Simply the best! Cristiano Ronaldo, Portugal, EU!”

Another example is the May 9, 2014 tweet: “Excellent consultations with Lady Aston today at WH on Iran and Ukraine.  President Obama had the chance to drop by.”

“Tonight is very special for many around the world. I wish they could spend it with the ones they love. Best wishes to all my followers” – December 24, 2014

Under his leadership, the EU Embassy was a hub of activity both diplomatically as well culturally. The Transatlantic Trade and Investment Partnership (TTIP) being negotiated between the European Union (EU) and the United States aimed at removing or reducing tariffs and non-tariff barriers. It is a strategic relationship that needs to be strengthened, he said. It is a subject he has discussed during interviews with the Diplomatic Courier as well as the Center for European Policy Analysis.

Another example is Conversations in Culture  – a very interesting and popular monthly program, held at the EU Embassy in downtown Washington, which features some of the best European culture. “Conversations in Culture offers diverse programs on European culture, including music, visual art, theater, culinary art and literature – with an educational twist, “describes the EU Embassy website.

Before his appointment in Washington as the EU’s Ambassador, he brought a wealth of experience in senior positions. He served as the Director General for External Relations at the European Commission, the EU’s executive body. He helped formulate and execute the EU’s foreign policy and played a key role in preparing for the new European External Action Service (EEAS) introduced by the Treaty of Lisbon.

Ambassador Vale de Almeida served as the Head of Cabinet for European Commission President José Manuel Barroso during 2004 to 2009.  He accompanied President Barroso in all EU Summit meetings and coordinated with Heads of State and Governments in all 28 Member States and was also the President’s Personal Representative for the negotiations on the Treaty of Lisbon.

He played a key role on behalf of EU for G8 and G20 summits. Ambassador Vale de Almeida also attended Summit meetings with EU’s strategic partners around the world. Earlier in his career in the European institutions, he held several senior positions in the European Commission and the Economic and Social Committee.

Ambassador Vale de Almeida joined the European Commission in 1982 at its Delegation in Lisbon, after spending seven years as a journalist. He holds a degree in History from the University of Lisbon and has studied and received training in journalism and management in the United States, France, Japan, and the United Kingdom. Ambassador Vale de Almeida was decorated by the President of the Republic of Portugal with the ‘Grã-Cruz da Ordem do Infante D. Henrique’ (Grand Cross of the Order of the Infante D. Henrique) in 2011.