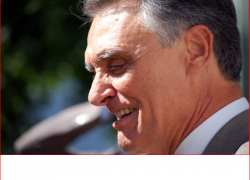 The President of Portugal, Aníbal Cavaco Silva, congratulated President Barack Obama, on Wednesday, on his re-election to the White House, remembering the “significant role of the Portuguese community and their descendants,” who live in the United States.

The message from Cavaco Silva, published on the government official site, wished the “greatest success” for Obama’s second term on office.

“I am sure your Excellency will continue, in your new term, as you did in the past, to strive to contribute towards a solution to the challenges raised by the international community,” the note said.

US President Barack Obama was re-elected Tuesday for another four-year term of office.

PSI-20, the Portuguese benchmark index, was trading 0.4% higher in the first hours of this Wednesday’s session, at 5,395.41 points, in line with the main European markets.

Markets in Europe were being spurred by Barack Obama’s victory in the US presidential election and by positive corporate earnings presented this morning.