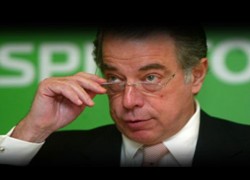 The former CEO of Portuguese Banco Espirito Santo (BES), Ricardo Espírito Santo Salgado, was detained on Thursday morning as part of the Monte Branco operations, which is investigating the largest capital laundering scheme in Portugal, a source at the central criminal court told Lusa.

Related Posts on the Web