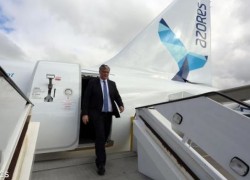 The President of the Government of the Azores, Vasco Cordeiro, considered that the meeting with the Permanent Bilateral Commission, held in Washington, DC this week, was “constructive” and that the United States had presented more effective and concrete actions regarding the environmental decontamination process on Terceira island.

“With regard to the environmental issue, which is the main concern at the moment, the United States presented data indicating more diligent, concrete and effective actions done so far,” President Cordeiro said.

He also stated that, according to information released, “the United States has moved forward” with intervention in identified places, namely two sites – South Tank Farm and Portas das Armas – and that decontamination actions are being planned in eight additional locations on the island.

“These actions are on the right track as they are concrete measures as we have been demanding for a long time,” and he said, “We consider that all the information provided by the United States, either in terms of interventions in new locations or in terms of results indicating an improvement in the existing situation, must be verified from a technical and scientific point of view.”

He defends the need for a more effective and expeditious action regarding the environmental cross-contamination of  the Lajes Air Base area, resulting from the accumulation of chemical hazardous waste from the US military use of the grounds.

President Cordeiro participated in the 39th meeting of the Permanent Bilateral Commission between Portugal and the United States of America held in Washington, Wednesday, May 23.

This was the eight time that Vasco Cordeiro  participated the meetings held by this body, established under the 1995 Defense and Cooperation Agreement, following the U.S. decision to reduce its military and civilian presence in Lajes Air Base as announced in late 2012. The primary mission for the Lajes Air Base is to serve as a refueling stop in the Atlantic.