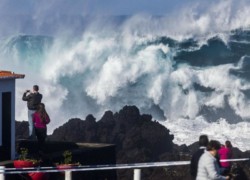 The office of the Portuguese Prime Minister António Costa has announced that the Minister of Economy, Pedro Siza Vieira, is traveling to the Azores to assess damages caused by hurricane Lorenzo and prepare “an effective response” from the central government.

The storm ravaged the nine islands of the archipelago of on Wednesday, with high winds, torrential rain and sea swells, causing severe infrastructure damages and displacing many families. No loss of life was reported.

According to the local press, about 100 people were removed and/or relocated from their homes. The most affected islands were Flores and Corvo, in addition to Faial, Pico, Sao Jorge, Graciosa and Terceira.

The commercial port of Lajes of Flores island was completely destroyed by the storm, which also caused tree falls, flooding, landslides, damaged roads and coastal surges on all the islands.

The president of the Regional Government of the Azores, Vasco Cordeiro, praised “the exemplary manner in which the municipal and regional entities acted before and during the hurricane.” He also praised “the involvement of many volunteers since the first hour,” in the cleaning work and helping those hit by the storm.

According to his assessment, “several infrastructures need intervention in view of the damage they present, the most serious being the port of Lajes das Flores, which was totally destroyed.”

“There is also work that is being done since Thursday to ensure that normality is restored,” he said.

Lorenzo reached the western Azores on Wednesday as a Category 1 hurricane before becoming a tropical storm heading to the United Kingdom and Ireland.

Once a Category 5 storm, hurricane Lorenzo gained maximum sustained wind speeds of 160 mph, making it the strongest hurricane to develop in the eastern Atlantic, according to the U.S. National Oceanic and Atmospheric Administration (NOAA). Also according to NOAA’s historical database, only seven Category 2 or stronger hurricanes have tracked within 200 nautical miles of the Azores in records dating to the mid-19th century.