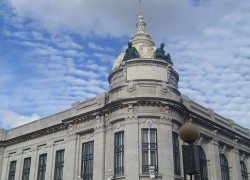 From Sunday to Monday, overnight, the governor of the Bank of Portugal, Carlos Costa, has decided to split Banco Espírito Santo (BES) into two separate banking entities.

The measure was made possible through the “Resolution Fund,” a provisional fund, set up in 2012 by all banks in Portugal, to help troubled banks. With this solution Banco Espírito Santo disappeared overnight.

According to the move, through the Resolution Fund, the Bank of Portugal will recapitalize the troubled BES by injecting Euro4.9 billion into the newly created “good” BES (Novo Banco), which maintains the BES branding and framework while dropping the “toxic assets” into the “bad” BES which will be spun off after losing its banking license.

Accordingly, Novo Banco will have just one shareholder – the Resolution Fund – while the  shareholders of the former BES are left with the “bad” bank’s “toxic assets.”

The solution came after BES announced first-half losses of a staggering Euro3.6 billion last week, mainly due to impairments and the snowball bankruptcies of Group Espirito Santo (GES) affiliates which have filed for creditor protection, Lusa reported.

On Monday morning, following the announcement of the decision, the headquarters in Lisbon of the Novo Banco (former BES) opened for business as usual without incident,  “with just as many customers as usual and nothing out of the ordinary,” it was reported.

Meanwhile, the Portuguese Finance Ministry has stated that taxpayers will not have to support the costs of the troubled bank rescue and that the European Commission (EC) had approved the solution in line with European Union (EU) regulations. The move was not a bailout or a nationalization, it was stated. The solution is temporary and the loan will be repaid.