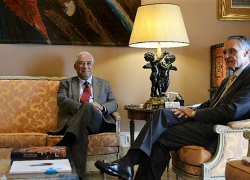 Fifty one days after the parliamentary elections on October 4, Portugal’s president, Aníbal Cavaco Silva, has named, on Tuesday, Socialist Party leader, Antonio Costa, Prime Minister, calling him to form government with the Communist Party and radical Left Bloc. The pronouncement ends weeks of presidential indecisiveness over the political future of the country.

The appointment comes after Costa’s alliance with the Communists, Greens and the Left Bloc toppled an 11-day center-right coalition minority government, the shortest administration in Portuguese history. Outgoing Prime Minister Pedro Passos Coelho had won the most seats in elections on October 4, but lost the absolute majority it had enjoyed since 2011.

Costa will head an anti-austerity alliance of leftist lawmakers, who have pledged to vote with the Socialists in parliament. The alliance has pledged to speed the economic recovery by reversing some of the austerity policies implemented by the outgoing government led by conservative Passos Coelho. They plan to stimulate consumption by reverting cuts in pay, pensions and public services, as well as tax increases.

The austerity policies under Passos Coelho administration are believed to have improved Portugal’s economy. Unemployment, which surged to a record 17% after 2011, had fallen to 12%. Yet statistics seem to have overlooked that since 2010 an estimated 400,000 Portuguese have left the country to seek work abroad.

Antonio Costa, 54, a former mayor of Lisbon, has maintained that his government will meet Portugal’s international commitments, as the country recovers from the 78-billion-euro ($83 billion) bailout Portugal agreed in 2011 with the IMF, the European Central Bank and its EU partners, aimed to reducing the national deficit.

Still, many analysts fear that in the short term the leftist alliance lead by the Socialists may find it hard to achieve their anti-austerity aims and also meet the country’s fiscal goals.