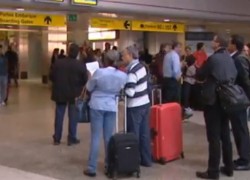 Portuguese air traffic controllers called off Thursday partial strikes planned for between June 29 and July 3, when workers were expected to stop working for two/four-hour periods each day.

In a statement issued before dawn by NAV, the air traffic controllers union federation, “inexistent paths of dialogue” had opened with government representatives.

Among other issues, the unions, including air traffic controllers, demand their exemption from some government-imposed austerity measures and negotiations over a new “business model” for NAV.

Similar stoppages in April and May caused hundreds of flights to be canceled and/or retimed. Air traffic controllers are protesting against restructuring services and budget reductions.

Yet delays and cancelations are expected following strikes by TAP Air Portugal pilots announced for July 5 and 8 and August 5 and 8 if the airline management does not meet their demands.

Pilots are protesting against disciplinary measures taken against some of their pilots and demanding de departure of several members of management.

According to SPAC, the airline pilots’ union, pilots are demanding that the Flight Operations director and the Chief Pilot are dismissed immediately and that all unjustified absences and sanctions imposed in the pilots arising from unilateral action by the company are cancelled.

State owned and managed, TAP Air Portugal is due to be privatized by the end of the year. The decision to strike was taken at a general meeting of SPAC last week.

Travelers are advised to contact their travel agents and/or airlines for further information before flying to or from Portugal during the periods affect by the strikes.