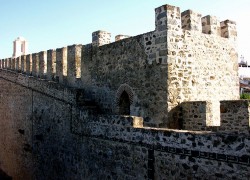 According to the UNESCO statement released June 30, in St. Petersburg, Russia,

The site, extensively fortified from the 17th to 19th centuries, represents the largest bulwarked dry ditch system in the work. Within its walls, the town contains barracks and other military buildings as well as churches and monasteries. While Elvas contains remains dating back to the 10th century A.D., its fortification began when Portugal regained independence in 1640. The fortifications designed by Dutch Jesuit Padre João Piscásio Cosmander represent the best surviving example of the Dutch school of fortifications anywhere. The site also contains the Amoreira Aqueduct, built to enable the stronghold to withstand lengthy sieges.

The city of Rio de Janiero, Brazil, also became this Sunday a World Heritage Site. It is the first city on the planet to receive the title under the category “cultural landscape.”
A historic Margravial Opera House Bayreuth in Germany and eight interconnected lakes in Chad are some of the other sites that have been added to the 2012 World Heritage List of the United Nations Educational, Scientific and Cultural Organization. the Lakes of Ounianga in Chad, which are 18 interconnected lakes in the arid Ennedi region of the Sahara Desert covering an area of 62,808 hectares. The saline and freshwater lakes are home to diverse fauna and microorganisms.

Elvas  city holds historic remains dating back to the 10th century A.D.. Its fortification began being built after Portugal regained independence from Spain in 1640.  Read more >>