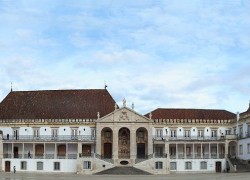 The two thousand page candidacy document describes the history of the seven century old university as one of the most relevant educational institutions in Portugal and abroad.

Founded by King D. Dinis of Portugal (1261-1325), and established by Papal Bull of Nicholas IV on the 9th August 1290, the University of Coimbra is Portugal’s oldest and largest university and one of the oldest universities in continuous operation in the world.

The University of Coimbra is home to the Joanine Library (Biblioteca Joanina) established in the 18th century and considered one of the most beautiful university libraries in the world. The library holds over 250,000 books dating from the 12th to the 19th centuries, dealing mainly with civil and canon law, theology and philosophy.

Coimbra city boasts the largest botanical gardens of Portugal and one of the most beautiful in Europe. The garden, dedicated to the study and protection of plants and wild life, was established in the 18th century.