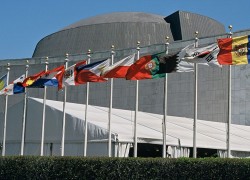 The UN General Secretariat has launched the new “Young Professionals Program” (YPP) open to highly qualified international candidates who are ready to launch a professional career as civil servants across the globe.

Portugal is included in the 2011 list of participating countries which is published annually and varies from year to year.

Other Portuguese speaking countries selected for the 2011 “Young Professionals Program” include Angola, Brazil, Guiné-Bissau and Mozambique.

Portuguese young professionals are encouraged to apply for the newly created program offered to the selected nationalities. This year the application period ends September 10, 2011.

To qualify, applicants must hold at least first-level university degrees; be 32 or younger at the end of 2011; speak English and/or French fluently; and be a national of a participating country.

Applicants are required to take part in the National Competitive Recruitment Examinations (NCRE) examination held December 7, 2011 in locations across the globe. The NCRE is held on a yearly basis in countries that are selected on the basis of their representation in the Secretariat.