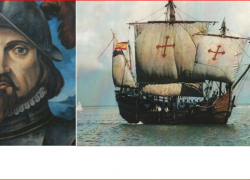 The University of Massachusetts Dartmouth, Ferreira-Mendes Portuguese-American Archives, will host a lecture by author Manuel Rosa titled “The Secret Identity of Columbus: Peasant to Viceroy in 33 Days.”

The event, free and open to the public, will take place October 25, at 7pm.

Manuel Rosa has written three books revealing new details about Columbus remarkable life under a secret identity.  For over 20 years he has researched medieval documents at archives in Portugal, Spain, Dominican Republic, and Poland.

Rosa believes he has solved a 500 year-old mystery by establishing the theory that Columbus was a Prince, by the name of Segismundo Henriques, born in Madeira, Portugal.

Rosa is convinced that Columbus was the son of King Vladislav III of Poland, who disappeared at the Battle of Varna in 1444.

According to Rosa, Columbus was trained as a pilot in Portugal and lived in Madeira where he married Filipa Moniz, a Portuguese noblewoman and daughter of Bartolomeo Perestrello, a Knight of the household of Prince Henry the Navigator, Captain and Governor of Porto Santo, a smaller nearby island at northeast of Madeira.

Manuel Rosa is a historian and author who is fluent in several languages and lives in Durham, North Carolina. He has been called today’s most knowledgeable academic on the life of Columbus and is working on a screenplay for “Columbus, The Untold Story.” Among the many academics who support his conclusions is Prof. James T. McDonough Jr., Ph.D., Professor at St. Joseph’s University.