UMD: Study in Lisbon European “City of the Year” – Scholarships 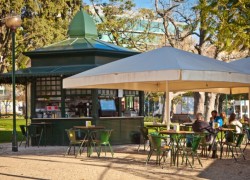 The UMass in Lisbon Study Abroad Program and the Center for Portuguese Studies and Culture at the University of Massachusetts Dartmouth announced today the creation of the Elisia and Mark Saab Study Abroad Scholarship Fund for 2012-2014 in the amount of $30,000.

“This generous gift from Elisia and Mark Saab puts living and learning in one of the world’s most dynamic cities within reach for students from the UMass system and beyond,” said Prof. Michael Baum, director of UMass in Lisbon and Chair of the Political Science Department at UMass Dartmouth.

UMass in Lisbon participants may spend either a semester or year abroad for the same price they would pay studying on campus at UMass Dartmouth, including the cost of housing, a reduced-price meal plan, transport in Lisbon, field trips, and a Portuguese cell phone.

Scholarships will be awarded to 30 students based on past academic excellence, a statement of financial need, and a reference from at least one professor. The UMass in Lisbon Award Committee expects to offer up to five $1000 Saab scholarships per semester.

Interested students can learn more at about the Saab scholarships and UMass in Lisbon, at www.umassd.edu/lisbon .

Lisbon, the capital of Portugal, is renowned for its cosmopolitan character and high quality of life. In fact, it was named last month as European City  of the Year by the Academy of Urbanism in London, England. With a population of nearly 2 million, greater Lisbon is a gateway both to the world’s largest economy in the European Union and to the world’s 200 million Portuguese speakers – a community with deep ties to Southeastern Massachusetts.

About Elisia and Mark Saab

Elisia and Mark Saab are distinguished entrepreneurs with a long record of giving back to the community, and to the University of Massachusetts system. Together, they founded Advanced Polymers in 1989, an industry leader in the medical technology field. Since then, the Saabs have endowed professorships, created scholarships and supported a variety of causes in the Lowell area and across Massachusetts.