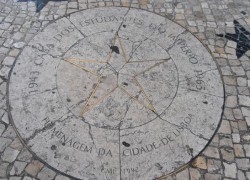 The University of Massachusetts Dartmouth Center for Portuguese Studies and Culture is hosting a lecture, by Prof. Fernando Arenas, titled, “Africans and Afro-Descendants in Portugal: Continuity and Ruptures from Late Medieval to Postcolonial Times.”

The lecture will discuss the presence of Africans and their descendants in Portugal from the late Middle Ages until today. It will also offer an analysis of recent feature films and literary fiction related to sub-Saharan African immigrants and their descendants in contemporary Portugal, while investigating how this cultural production reflects the changing Portuguese nation, where the boundaries between postcolonial Portugal and its former African colonies, as well as the notions of what constitutes “being African” or “being European,” are being redefined.

Fernando Arenas is Professor of Lusophone Studies at the University of Michigan with a dual appointment in the departments of Afro-American and African Studies and Romance Languages and Literatures. His work focuses on cultural expressions such as literature, film, and popular music, which he studies through an interdisciplinary and theoretical prism centering on the dyad of post-colonialism and globalization. He is the author of Lusophone Africa: Beyond Independence (2010) and Utopias of Otherness: Nationhood and Subjectivity in Portugal and Brazil (2003), both from the University of Minnesota Press.