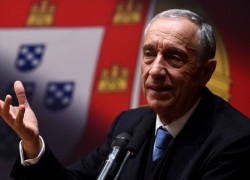 Following the State House ceremony, Chancellor Johnson joined President De Sousa and Portuguese Prime Minister António Costa aboard the tall ship Sagres for the signing of student and faculty exchange agreements between UMass Dartmouth and several Portuguese universities. Prime Minister Costa will be receiving the Chancellor’s Citation for his work towards the educational exchange.

“UMass Dartmouth is honored to be the preeminent university in America dedicated to the study, teaching, and sharing of knowledge related to the Portuguese-American experience,” Chancellor Johnson said. “The economic and cultural bonds between our university, our region, and the Portuguese-speaking world are vast, strong, and filled with even greater potential.”

“The opportunities that spring from these agreements will strengthen UMass Dartmouth’s ability to provide a private college educational experience and a public university value,” Chancellor Johnson said. “Connecting our Tier 1 National Research University to the world-class universities of Portugal promises great advancements in teaching and research that benefit our communities.”

The agreements grew out of a February 2018 visit by Chancellor Johnson to Portugal where he met with university officials and Camões Instituto representatives as part of his effort to enhance UMass Dartmouth’s relationship with the Portuguese-speaking world. UMass Dartmouth is located in a region with one of the highest concentrations of Portuguese-Americans in the United States. 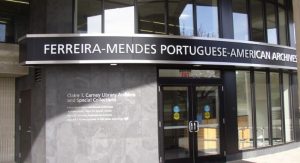 As a sign of his commitment, Chancellor Johnson recently moved the Center for Portuguese Studies and Culture from the College of Arts and Sciences to the Office of the Chancellor. UMass Dartmouth also houses the nationally recognized Ferreira-Mendes Portuguese-American Archives, Department of Portuguese, and the Tagus Press, which publishes Portuguese literary works. Items from the Ferreira-Mendes Portuguese-American Archives will be on display at the State House for Day of Portugal events.

UMass Dartmouth’s connection to the Portuguese-American has recently grown beyond its historical focus on culture and literature to science, health care and business: The School for Marine Science and Technology has formed a doctoral education partnership with Brazil’s University of São Paulo Institute of Oceanography; The College of Nursing partners with the University of the Azores on the “Bridging the Atlantic” community nursing student exchange program; The Charlton College of Business and Center for Innovation and Entrepreneurship bring students to a “Startup Weekend” entrepreneurship forum at the Nonagon Science and Technology Park in the Azores; The Center for Innovation and Entrepreneurship is advising the Azores business and government community on the development of a technology incubator.

The President of Portugal visited Boston on June 10 for the celebrations of the 10th of June (Day of Portugal). He was accompanied by Prime Minister António Costa, the Minister of Foreign Affairs Augusto Santos and Vasco Cordeiro the President of the Government of the Azores. Portuguese American community with a dinner at the Capital Grille Restaurant, partaking as guest of honor in the “Water Fire and Portuguese Street Festival” at the Water Place Park. On June 11, additional events in Boston included the 34th annual Heritage Day of Portugal, honoring the President of Portugal at the Massachusetts State House. The ceremony, sponsored by the Portuguese American Legislative Caucus, also feature the presentation of  the Heritage Day of Portugal awards to Massachusetts Portuguese-American individuals who have served as leaders in their respective communities.