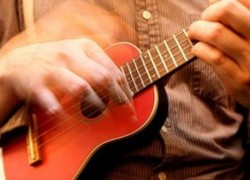 The ukulele is a small instrument with a unique sound and a rich history. The tiny guitar was introduced in Hawaii about 1879, by Portuguese immigrants from Madeira.

This week, Canadians in Vancouver, British Columbia, are having great fun at their weeklong ukulele celebration that will last until April 18 to close with a grand finale concert at 7:00 at Oak Bay High School Theater 2151 Cranmore Rd.

The ukulele, which translates to “jumping flea” — based on how the hands move while playing the instrument — was introduced in the mainland United States around 1915, after being featured at the Panama Pacific International Exposition in San Francisco. Later the ukulele gain acclaim in United Kingdom and from there around the world.

The ukulele  became a symbol of the jazz age and musicians such a Elvis Presley, George Harrison, Elvis Costelo, Bruce Springsteen and Tiny Tim were fond of the famous easy to play Portuguese string instrument in Hawaii.

Ukulele festivals are popular all over the United States and Canada.  The 17th Ukulele Festival of Northern California took place last week at the Chabot College Performing Arts Center in Hayward.