Ukulele craze is taking over – NYT 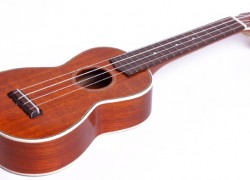 The ukulele, brought to America by Portuguese immigrants, is a little instrument making a big splash worldwide, with clubs and festivals sprouting up all over.

According to Friday’s  New York Times  the modest four strings ukulele is permeating the American culture.

The paper reports that lately the ukulele sales have surged. Everyone seems to want this light carefree instrument that “invokes innocence, sincerity and childlike wonder, as well as nostalgia for a pre-rock ’n’ roll era.”

The strength of the easy to play instrument seems to be its limitations, “it lacks the resonance of the guitar, the bark and twang of the banjo, and one result is a narrow range of performance styles. In some ways that’s the ukulele’s strength, a simple, effective strum that anyone can learn”—writes the NYT.

The ukulele was introduced in Hawaii about 1879, by Portuguese immigrants  from Madeira. It became a symbol of the jazz age and musicians such as Elvis Presley, George Harrison, Elvis Costelo, Bruce Springsteen and Tiny Tim, were fond of the famous easy to play instrument.

The Portuguese first immigrated to Hawaii around 1794. They were whalers who jumped ship. Many of those sailors were from Faial, Graciosa, and São Jorge. Some were from Cape Verde.

Additional Portuguese settlers came from the Madeira islands. An estimated 4 percent (48,527) of the population of Hawaii today is of Portuguese descent.