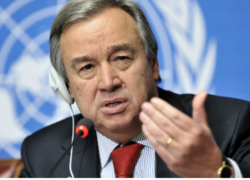 The Secretary-General of the United Nations and former Prime Minister of Portugal, António Guterres, may be about to play a key role in de escalating the war and bringing about peace in Ukraine.

Guterres is to have separate meetings with the presidents of Russia and Ukraine in their respective capitals. He has already told them he would like to discuss what urgent steps could be taken to end the war, as well as the future of multilateralism based on the charter of the United Nations and international law. The meeting with President Putin and his foreign minister in Moscow is scheduled for Tuesday.  Then on Thursday he is due to meet the Ukrainian foreign minister and President Volodymyr Zelenskyy in Kyiv.

Like Pope Francis, Guterres had called for a four-day truce in the conflict during the Orthodox Christian Easter period with Easter Sunday on April 24. Russia rejected the idea.

In addition to pursuing his official tasks of high international office, the secretary-general has spoken emotionally about the sufferings of the war.

“I will never forget the horrifying images of civilians killed in Bucha. I immediately called for an independent investigation to guarantee accountability. I am also deeply shocked by the personal testimony of rapes and sexual violence that are now emerging,” he said recently.

While awaiting a response to his requests for personal meetings and well-aware that the war displaced more than 10 million people in just one month, Guterres sent his UN Emergency Relief Coordinator, Martin Griffiths, to the warring nations to press for an urgent humanitarian ceasefire.

He had previously set up a Global Crisis Response Group (GCRG) and in commenting on the group’s first report he noted that while most attention has been focused on the effects of the war on Ukrainians, it was also impacting in other countries in terms of increased poverty, hunger and social unrest.

In highlighting overarching points made clear in the GCRG’s report, he said that “far beyond the Ukraine’s borders, the war has led to massive increases in food, energy and fertilizers because Russia and Ukraine are lynchpins of these markets.”

He could almost have been talking about his home country, Portugal, but he was referring to no less than 74 developing countries with a population of 1.2 billion – one third of whom are already living in poverty while struggling with soaring food, energy and fertilizer costs. Thirty-six countries have been counting on Russia and Ukraine for more than half of their wheat imports. Prices of wheat and maize were already on the rise, but the war has made a bad situation very much worse.

At the same time – as well reported – Russia is a top energy supplier. Oil prices are up 60 per cent over the past year, accelerating the prevailing trends.

“Many developing countries are drowning in debt, with bond yields already on the rise since last September, leading now to increased risk premiums and exchange rate pressures,” said Guterres.

The GCRG report also shows that there is a direct link between food prices and social and political instability, which gave rise to Guterres’ insistence: “Our world cannot afford this. We need to act now.”

The secretary-general has not been without his critics. Before his requests for meetings with the leaders in Moscow and Kyiv, a group of more than 200 former UN officials wrote to him saying that he must personally do more to take a lead and mediate a peace, otherwise the UN itself risked “not just irrelevance, but its continued existence.”

These former staff members urged in their letter that the current UN boss should raise his profile and be prepared to take personal risks to secure peace, otherwise the UN itself would be facing an existential threat due to the invasion of Ukraine by one of the five permanent members of the UN Security Council.

The secretary-general has obviously taken the advice of former colleagues to heart. He faces a massive challenge and we will just have to wait and see what becomes of it.