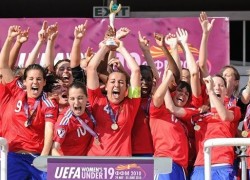 The Union of European Football Associations (UEFA) is celebrating Women’s Football Day with an event in Portugal, schedule for Saturday May 14, at the National Stadium in Jamor.

The event coincides with the Portuguese Women’s Football Cup final, which, for the second consecutive year, is being played at the National Stadium in Jamor.

The day will serve as a celebration of the game and a tribute to the players and clubs that have been investing in women’s football.

Carlos Godinho, from the Portuguese Football Federation (FPF) said, “We want to turn the day into a great celebration of women’s football and, for that purpose, we will have its great protagonists involved.”

A number of activities are planned, including a photo exhibit of the women’s national team. Women teams from all over the country, connected to school sports and competitions, will also participate.

The Union of Football Associations (UEFA) represents 53 member nations and is the governing body of football in Europe. Divided into regions, UEFA runs all national club competitions.