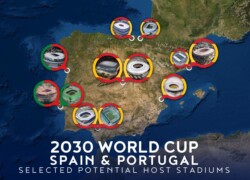 The Union of European Football Associations (UEFA) president, Aleksander Ceferin, has said he is certain Portugal together with Spain could host the 2023 FIFA World Cup, one of the most significant world sports events, despite bids from south American countries Argentina, Chile, Paraguay and Uruguay.

Aleksander Ceferin believes the quadrennial tournament will be shared by two countries on the Iberian Peninsula. “I am sure that the 2030 World Cup will be played in Spain and Portugal,” Ceferin said via videoconference during the opening of the Football Talks international congress in Lisbon. South America’s most recent 2014 World Cup hosted by Brazil. “I see it as a winning bid. We will do what we can to help the bid,” Ceferin stated.

He believes that Spain and Portugal will provide the proper infrastructure and atmosphere to welcome the world in 2030. “This bid is a winning one, and we will do everything possible to help two countries that are passionate, live and breathe football, and that have a good infrastructure,” he said.

Portugal is not a stranger to hosting a prestigious soccer tournament. Portugal has never staged the prestigious World Cup, but held the 2004 European Championship, while Spain hosted the 1982 World Cup and launched a failed bid along with Portugal to stage the 2018 tournament, which was awarded to Russia.

For Ceferin and UEFA the joint proposal by Spain-Portugal could win the 2023 bid. Three Portuguese stadiums are included in the bid in addition to a dozen stadiums in Spain.

“We will do what we can to help. It’s time for Europe to host the World Cup and we have some plans. We have already spoken to Fernando Gomes and Luis Rubiales. I am sure that the World Cup’2030 will be played in Portugal and Spain, two countries that feel football. It is a winning bid, and we will do everything to help these countries that have a passion for football, live and breathe football and have good facilities,” he pointed out.

This year’s event will be held in Qatar, in the Middle East for the first time, followed by Canada, United States and Mexico in 2026, showing that FIFA is open to taking its ever-growing tournament to specific countries around the globe that haven’t hosted it before. will host the World Cup this year

South America has hosted the quadrennial event five times: Uruguay 1930, Brazil 1950, Chile 1962, Argentina 1978, and Brazil 2014. If Spain-Portugal wins the bid, Europe will mark its record ninth time as host, depending on whether Russia counts as a transcontinental nation, despite its United Nations classifications as a European country.

The Iberian nations agreed in 2020 to submit a proposal to stage matches in the World Cup’s centenary year. However, a four-way bid from Argentina, Chile, Paraguay, and Uruguay is expected to be among 2030’s top candidates given that the latter country hosted and won the inaugural World Cup in 1930.

The UEFA Champions League is one of the most prestigious tournaments in all of sports.