TUIST: Traditional University Tuna to perform in NJ and NYC – Day of Portugal 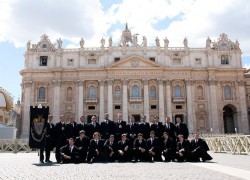 The University Tuna of Instituto Superior Técnico (TUIST), based in Lisbon Portugal, is participating in the celebrations of Day of Portugal, taking place in New York (June 9) and New Jersey (June 17).

TUIST is one of the oldest students’ associations of Instituto Superior Técnico (IST), formed by more than 200 students and alumni. IST is Portugal’s largest and most prestigious school of Engineering, Science, Technology and Architecture.

Since 1993, TUIST has been awarded more than 100 national and international awards by participating in numerous musical events and through issued albums.

In addition to participating in the various activities promoted by the Day of Portugal celebrations, in New York and New Jersey, TUIST is actively contacting the Portuguese community in the United States seeking additional opportunities to promote their music and academic spirit during their upcoming visit. Interested parties may contact João Fernandes at tuistmail@gmail.com.

TUIST visit is sponsored by the Luso-American Development Foundation (FLAD), a Lisbon-based grant making organization funding initiatives to promote scientific and cultural exchanges between Portugal and the United States.

The Day of Portugal is a national annual holiday celebrated by the Portuguese on June 10. The date also honors the life of Luís de Camões, Portugal’s national poet who died on the 10th of June 1580. Camões wrote “Os Lusiadas,” Portugal’s national epic poem celebrating the 16th century national history and achievements. For the Portuguese people living abroad, the Day of Portugal is also the time to showcase their heritage and ethnic pride.