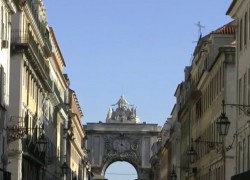 Lisbon was voted one of the “Top 25 Destinations in Europe” by the “Travelers’ Choice 2012” according a list released by TripAdvisor.

While Lisbon ranked 11th on the list, London was voted the favorite destination followed by Rome and Paris which topped the ranks last year but dropped to number 4 this year.

Lisbon was summed up in one word: variety. According to TripAdvisor, “From the 12th-century Sé Cathedral to the modern bridges spanning the Tagus River, from the 18th-century Águas Livres aqueduct to the futuristic Oriental Station, Lisbon traverses the ages. The city’s many neighborhoods include Moorish Alfama, home of the city’s tallest hill, and 17th-century Bairro Alto, with its hopping nightlife. Museums, castles, open-air markets, funiculars, Fado music – Lisbon’s pleasures include these and much more.”

Travelers’ Choice Destinations honor top travel spots worldwide based on millions of real and unbiased opinions from TripAdvisor travelers. Award winners were determined based on a combination of travelers’ favorite places and overall destination popularity.

The awards  named the top 25 places by millions travelers worldwide in various categories, including Best Family Vacations and Best Food and Wine Destinations, as well as various subcategories of hotels: Trendiest Hotels, Best Bargain Hotels and Best Luxury Hotels, among others.