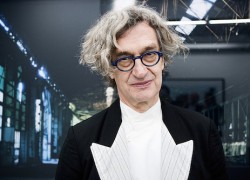 This annual award recognizes the career and contributions of a European citizen in promoting European cultural heritage. The award ceremony is scheduled for October 24, 2017 at the Calouste Gulbenkian Foundation in Lisbon.

Maria Calado, President of the Centro Nacional de Cultura (National Centre of Culture), explained the choice of Wenders on the Europa Nostra website: “In a career spanning 50 years, he has been a true master in search of images and words to capture the sense of place in Europe.”

Wim Wenders was born in Düsseldorf, Germany and began his film career as part of the New German Cinema group of the 1960s. Wenders, along with his contemporaries such as Werner Herzog, Margarethe von Trotta, and Rainer Werner Fassbinder (among others), reflected the rapidly changing post-war period in Germany.

Wenders has sought stories that show the social, political and economic transformation of the European continent, occasionally turning his sights and his cameras to Portugal with feature films like The State of Things (1982), Until the End of the World (1991) and Lisbon Story (1995). He has also worked on documentaries, notably co-directing The Salt of the Earth (2014) with Juliano Ribeiro Salgado, a film that explored the work of Brazilian photographer Sebastião Salgado.

In 2012, the Wim Wenders Stiftung was established in Düsseldorf. The foundation archives and digitizes Wenders’ films. It also helps to maintain a grant program (Wim Wenders Grant) for young filmmakers and video artists since 2014.

Italian Member of the European Parliament (MEP) Silvia Costa will also be recognized in October for her contributions to EU strategy on cultural heritage.

Helena Vaz da Silva (1939-2002) was a cultural journalist, activist and politician. Born in Lisbon, she was part of a generation of intellectuals who came to prominence during the 1960s. She was the president of the Centro Nacional de Cultura as well as a Member of the European Parliament. In 2013, the Centro Nacional da Cultura, Europa Nostra and Clube Português da Imprensa established an annual award named in her honor. Recipients since 2013 include Italian writer Claudio Magris; Orhan Pamuk, Turkish writer and Nobel Prize winner; Catalan musician Jordi Savall; French cartoonist Plantu and Eduardo Lourenço, Portuguese essayist.