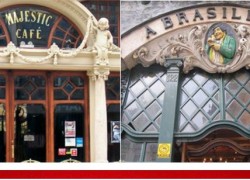 The online magazine, GlobalGrasshopper, has named Portugal’s Majestic Café (Porto), and A Brasileira (Lisbon), among the 15 “Best Historic Cafés in Europe.”

According to the magazine, the fans of Majestic Café (Porto), will love “[…]its stunning façade, exquisite interiors and a delightful winter garden. Famed for its Belle Epoque atmosphere it is perhaps one of the most photographed and aesthetically pleasing cafés in the world, let alone in Europe.”

As for the A Brazileira (Lisbon), one of the oldest and most famous cafes in the city’s old quarter, tourists will flock to the place “drawn by its early original early 20th-century facade, old carved wood and burnished metal decor and glinting bottles behind the bar.”

Based in the UK,  GlobalGrasshopper is dedicated to independent travelers. Read more here