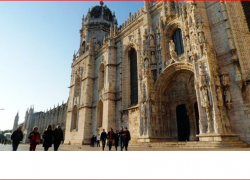 Revenues from tourism in Portugal should increase this year despite the ongoing economic crisis, largely thanks to foreign visitors, according to a top official.

Tourism is one of Portugal’s most important sectors, with revenues last year totaling Euro8.1 billion, according to Bank of Portugal figures.

“We have expectations of growth, despite the difficult economic situation we’re experiencing,” the director of marketing at Portugal’s Tourism Institute, António Padeira, told Lusa. “Two thirds of tourism activity in Portugal comes from foreign markets.”

Tourism officials are trying to target new customers with a range of new products aimed at different market segments.

For example, Portugal’s Secretary of State for Tourism is to fly to India later this month to promote Portugal as a destination, Padeira said, noting that each year 20 million of Indians travel abroad. Tourism officials have also been to China three times this year.

But the institute is not neglecting Portugal’s traditional markets, Padeira stressed.

He was speaking at a workshop on religious tourism in Fátima, the site of Portugal’s most important Catholic shrine, visited by five million people each year.

Local officials at the event told Lusa that much more could be done to take advantage of the shrine’s tourism potential, given that it is in the municipality of Ourém, just an hour’s drive north of Lisbon.