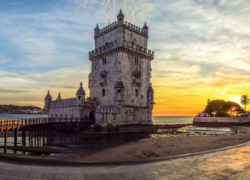 April 12 could be a highly significant day for Portugal’s shattered tourist industry, which is desperate to welcome visitors from abroad as soon as possible. A great many of those potential visitors, who have long been living in lockdown, are desperate to come.

On April 12 a British government taskforce will report to Prime Minister Boris Johnson with details of when and how international travel from the UK should be resumed.

The UK is Portugal’s number one source of foreign holidaymakers. So far, Prime Minister Johnson has made it clear that unessential travel from England will not be permitted before May 19. He has not yet announced when such travel will be permitted. UK Transport Secretary Grant Shapps said at the weekend that it was still “too early to tell” when holidays abroad would be allowed.

A scientific adviser to the British government has thrown new uncertainties into the confusion by telling the BBC that an extension to the ban on allowing summer holidays abroad was “extremely unlikely” because of the risk of travellers bringing coronavirus variants back to the UK. The adviser, Dr Mike Tildesley, said: “I think we are running a real risk if we start to have lots of people going overseas in July, for instance, or August.”

British Secretary of Defence Ben Wallace seemed to back this chilling remark by saying an extension of the May 19 ban on holiday travel could not be ruled out because “we are not going to do anything that puts at risk the national effort to control this pandemic.”He added that booking a holiday now would be “premature” and “potentially risky.” The Labour Party’s shadow foreign secretary, Lisa Nandy, says she will not be booking a holiday abroad.

In Scotland, national clinical director Professor Jason Leitch said foreign holidays in Europe were looking “less likely” as Covid numbers in some countries were “a cause for concern.”

Of concern in Portugal also is that a third Covid wave in Germany, Poland, France and Italy could not only hold up tourism from those countries, but somehow spread with variants elsewhere in the continent.

Covid daily rates in Portugal are currently lower than at any time since early October last year. This has given rise to hope among those in the travel industry, including airlines and tour operators, that things could start improving at least by June. They will have to wait to an announcement about the April 12 report before they have a better idea of what lies ahead so far as the UK is concerned.

For now, one good thing is that most, though not all, of the controversy over the AstraZeneca vaccine has been settled. It has been deemed to be “safe and effective with benefits that far outweigh the risks.” As in many other EU countries, Portugal briefly suspended the administration of the AstraZeneca vaccine as a “precautionary measure” following unsubstantiated reports about the risk of lethal blood clots.

Portugal now wants to push ahead as fast as possible with as many jabs as possible. Vaccinations so far have been very slow to administer even to the elderly and most vulnerable because of insufficient deliveries of AstraZeneca, Pfizer and Moderna doses across the European continent. Millions of the single-dose Janssen vaccine are awaited from the American Johnson & Johnson corporation.

Vaccinations rates in Portugal may remain low for weeks to come, but for now infection rates are becoming more manageable. The statistics change every day of course, but in round figures since the start of the pandemic in Portugal there have been 817,000 confirmed infection cases and just under 16,800 deaths.

The worst infected area has been in the north of the country. The most deaths have been in the Lisbon-Tagus Valley. Far, far fewer infections and deaths have been recorded in the prime holiday destinations of the Algarve and the two autonomous regions of Madeira and the Azores.

Lockdown restrictions within the country have started to be eased and will be lowered considerably on April 5, April 9 and May 3 by which time most public facilities will be open again, though with strict maximum group numbers, social distancing rules – and few if any foreign visitors in sight.