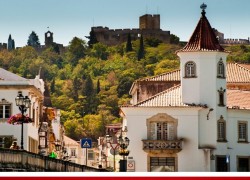 At about one-hour drive north of Lisbon, the town of Tomar occupies a special place in the history of Portugal and the world.

Built inside the walls of the Castle of Tomar, one of the finest examples of 12th Century military architecture, the original medieval town was established in 1159 on land granted by the first King of Portugal, D. Afonso Henriques, to the Order of the Knights Templar which foundation dates back to around 1118.

The Knights Templar had played a crucial role in Portugal attaining independence in 1139. Around 1190, they had already established their headquarters in the Castle of Tomar, the largest and best preserved European Templar settlement, recognized by UNESCO as a World Heritage site. 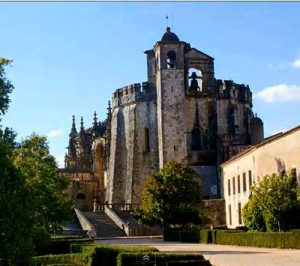 Convent of Christ in Tomar.

Inside its walls, visitors will find the Convent of Christ, a combination of a fortified citadel and a monastery. It was built in 1160 under the orders of Gualdim Pais, the fourth Grand Master of the Knights Templar in Portugal.

The imposing building holds a majestic octagonal round temple with a chapel – a magnificent charola [rotunda] – inspired by the Church of the Holy Sepulcher in Jerusalem. In the rotunda, the Knights Templar were initiated and are said to have attended Mass on horseback.

In 1160, Gualdim Pais also built the Church of Santa Maria do Olival, the first Templar church in Tomar, which became his burial place and the burial place for more than 20 Knights Templar. Four centuries later, Santa Maria do Olival served as the architectural model for the first churches built on the Azores and Madeira islands in the early stages of Portugal’s overseas expansion.

In 1312, King Philip IV, the Fair, of France ordered the arrest and execution of the Knights Templar in his country and in 1314, Pope Clement V dissolved the Order throughout Europe.

In Portugal, however, King D. Dinis persuaded Pope John XXII, in 1319, to allow fugitive Templars to join the newly created Order of Christ, [Ordem de Cristo], which was unique to Portugal. Soon after, the Castle of Tomar and the Convent of Christ became a safe haven and the last stronghold of the Knights Templar in Europe.

Retaining their original Templar structure and character, the members of Order of Christ became known as Knights of Christ [Cavaleiros de Cristo].  In 1357, they reclaimed the Convent of Christ as their headquarters and held enormous power in Portugal from the 14th to 16th century. In effect, the Knights of Christ and their Order of Christ planned and financed the Portuguese Age of Discoveries, placing the town of Tomar and its people at the center of Portugal’s overseas expansion. 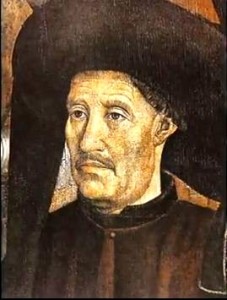 In 1418, Prince Henry, the Navigator, the founder of the famed Sagres naval center, near the town of Lagos, Algarve, became the Governor of the Order of Christ until his death in 1460. He brought to Tomar and Sagres some of the leading European geographers, cartographers, astronomers and mathematicians to assist him planning the maritime expeditions. Under his direction, Sagres, located about 268 miles away from Tomar, became a leading research and development center dedicated to the science of navigation, equipped with libraries, an astronomical observatory and ship-building facilities.

It was under Prince Henry’s leadership, and endowed with the vast Templar’s wealth, that the Order of Christ carried out Portugal’s 15th century maritime explorations. In Sagres, the Portuguese developed the caravela, a new type of long-distance vessel that could sail in both shallow and ocean waters and deeply into the wind at great speed.

Some of the most renowned Portuguese navigators were associated with the Order of Christ and received training at the Sagres expeditionary center, namely Vasco da Gama, Pedro Álvares Cabral, Bartolomeu Dias, Gil Eanes, Christopher Columbus and Ferdinand Magellan who reached all corners of the world.

Displaying the Cross of Christ on their sails, many more would departed from Sagres toward the unknown, eyeing new lands for discovery. Their first maritime success was the discovery  in 1418 of the island of Porto Santo by explorers João Gonçalves Zarco and Tristão Vaz Teixeira, followed by Madeira island in 1419.  Soon after, between 1427 and 1432, the nine islands of the Azores were found by the Knight of Christ Gonçalo Velho Cabral.

Found uninhabited, the Order of Christ proceeded to populate the islands – Madeira in 1425 and the Azores in 1445. The first settlers were mostly Christians from the Tomar area, the surrounding Estremadura province, and from the southern provinces of Alentejo and the Algarve.  Among them there were also Jews, Moors and some foreigners from France, Flanders and Italy.

It has been documented that the first person known to be born on the Island of São Miguel, Azores, was Nuno Gonçalo, the son of Vaz Botelho Gonçalo from Tomar, whose wife had arrived pregnant, in 1444, among the very first settlers on the island.

To honor their connection with Tomar and the Order of Christ, the actual flag of Madeira (image) and Madeira’s coat of arms (image) still display the Knights of Christ cross. For the same reason, the official coat of arms of the Azores (image) also displays the emblematic cross.

Prince Henry the Navigator died in 1460, but his work continued in Tomar and at the Sagres naval center under the direction of his nephew, King John II of Portugal, the next Master of the Order of Christ. During his reign,  Vasco da Gama rounded the Cape of Good Hope reaching India, in 1498. Other Portuguese explorers followed sailing far and beyond all the way through Asia.

Convent of Christ. A view of the chapel. The “charola” (rotunda) was embelished in the 16th century with paintings commissioned by King Manuel I.

The next ruler, King Manuel I of Portugal, also played a relevant role in Tomar and Sagres. He was appointed Master of the Order of Christ in 1484 and became King of Portugal in 1492. Under his reign, in 1500 Knight of Christ, Pedro Álvares Cabral, reached Brazil.

D. Manuel I ordered the addition of a new nave to the structure of the Convent of Christ, built in the Manueline architecture style, including the famous Chapter Window [Janela do Capítulo] (image). He also ordered the construction of the Church of São João Baptista, built in the gothic style, outside the walls the original Castle of Tomar, in the very center of the town.

His successor, King D. João III of Portugal, was deeply committed to the maritime explorations as well. In 1557, he ordered an addition to the Convent of Christ, a new cloister (image) considered one of the best examples of Renaissance architecture in Portugal.  A very devout Christian, King D. João III, the Pious, demilitarized the Order of Christ (which had become a quasi-secular military body) reverting it to its religious mission. During his rule, after reaching China, the first Portuguese missionaries and merchants arrived in Japan in 1543. Upon his dead in 1557, the Portuguese empire had spanned about 4 million square kilometers across the globe.

Another royal figure associated with Tomar was King Philip II of Spain, who was acclaimed and crowned King Philip I of Portugal at the Convent of Christ, in 1581, and recognized as such by the Cortes of Tomar. The event established the Iberian Union which lasted from 1581 to 1640, a transient period in the history of both countries, when Portugal lost its independence to Spain.

In 1593, King Philip I of Portugal  (Philip II of Spain), commissioned the construction of the Aqueduct of Pegões  [Aquaduto dos Pegões] to supply water to the Convent of Christ. The colossal structure, which took 20 years to complete, is comprised of 180 gothic shaped arches, extending for over four miles.(Image) 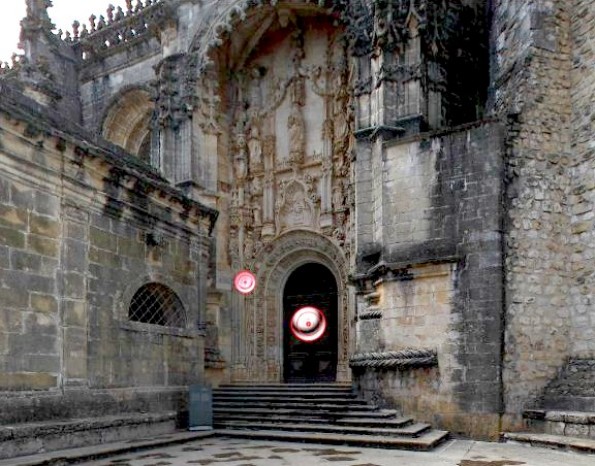 Take a virtual 3D tour of the Convent of Christ

(*) Carolina Matos is the founder and editor of the Portuguese American Journal news blog online. She was the Editor–in-Chief for The Portuguese American Journal, in print, from 1985 to 1995. From 1995 to 2010, she was a consultant for Lisbon based Luso-American Development Foundation (FLAD). She graduated with a Bachelor’s Degree in Liberal Arts and a Master’s Degree in English and Education from Brown University and holds a Doctorate in Education from Lesley University. She has been an adjunct professor at Lesley University where she has taught undergraduate and graduate courses. In 2004, Carolina Matos was honored with the Comenda da Ordem do Infante D. Henrique presented by Jorge Sampaio, President of Portugal.