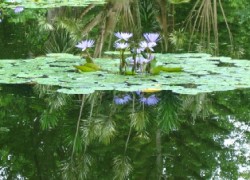 The Furnas Valley is home to the Furnas parish, a small isolated rustic community of about 900 dwellings. Set within a 6 km diameter crater of a dormant caldera, the valley is surrounded by towering hills with geysers and fumaroles nested within the lush green landscape.

The caldera is part of the Volcanic Complex of Furnas classified as an active stratovolcano  exhibiting eruptive activity. Since 1630, after the Azores were populated by the Portuguese, eruptions have occurred at century long spaced intervals.

Formed over 30,000 years ago, the volcanic activity in the valley is famous for its intermittent bubble-shower geysers and its many geothermal fumaroles next to a variety of thermal mineral water springs. The area holds one of the world’s largest thermal water resources, some hot, some cold, some saline, some sulphurous and some are just sparkling.

Indeed, the nine islands of the Azores are laid in the mid-Atlantic ridge where the Eurasian and North American tectonic plates collide and the whole archipelago was formed from about 32 active subaquatic eruptions raising the nine islands up from the ocean floor for millions of years. 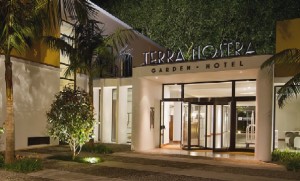 The Terra Nostra Garden Hotel is the most recognizable hotel of the Azores.  A treasured landmark, it is nestled inside the volcanic complex of Furnas Valley surrounded by dramatic cliffs of exquisite scenery.

Combining its 1930’s vintage style with the comforts of contemporary luxuries, the whole setting offers the visitor a memorable stay in one of the most beautiful scenic locations of São Miguel island.

Built in 1935, the Terra Nostra has passed from generation to generation remaining to this day in the Bensaúde family, the hotel’s first owners. The original building was fashioned in the Art Deco style by Azorean construction engineer Manuel António Vasconcelos.

Without sacrificing its unique original architectural décor, along the years the Terra Nostra has gone through some notable transformations while retaining its vintage aura. The renovation work has blent the hotel’s distinctive old  style with  modern conveniences.  As a result, the Terra Nostra provides travelers with a restful modernistic setting complete with glamour, harmony and tranquility.

A Garden Wing was added when the Terra Nostra was fully restored in the late 1990s. In 2013 it was again renovated and expanded to 86 rooms with the addition of an indoor heated pool, a wellness center, reading lounge, a contemporary lounge bar, banquet and conference room among other facilities.

The iconic Garden Hotel Restaurant was also renovated. The new setting offers visitors a sense of place at the Terra Nostra allowing guests to escape into a bygone era of simplicity and elegance. Overlooking the Terra Nostra Botanic Park, the restaurant lounge offers stunning views of the surrounding evergreen flora exceeding all expectations. 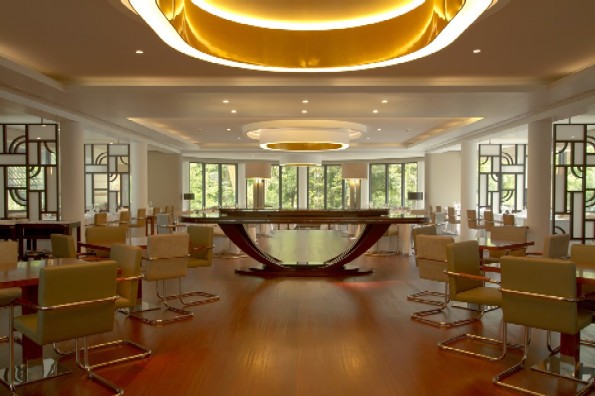 The Terra Nostra Botanical Park started being shaped in 1780, around “The Yankee Hall” built in 1775 by Thomas Hickling, a Boston trader who went into self-exile to São Miguel island, in 1769, to escape the pressures of his conservative loyalist father during the American Revolution.

In 1795, following the Independence Declaration, at his request Hickling was appointed American Consul in the Azores by President George Washington. To this day, the residence is still surrounded by some of the original trees imported from North America by the Hickling family.  As a reminder Thomas Hickling left his name carved on a rock dated of 1770. He had left America in 1769 to never return home. 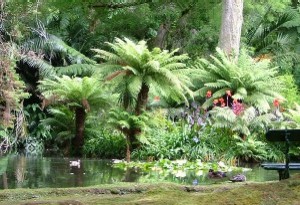 A work in progress, the Terra Nostra Park has since expanded to an area of 12.5 hectares, being recognized today as one of the most exquisite botanical parks in the world. The area holds thousands of botanical species which exceed 2,500 trees and 3,000 shrubs. Crisscrossed by trails, the whole area emanates a stunning atmosphere of exoticism complete with a collection of endemic plants most representative of the Azorean flora.

Visitors will also find an extensive collection of exotic trees, shrubs and flowers, brought in from 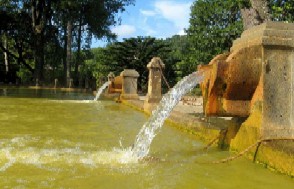 all over the world by generations of Azorean travelers and adventurers. It includes a magnificent 600 variety camellia collection, a vibrant azalea collection, a fern collection, a cycad garden and a ginkgo biloba garden. The endemic garden displays many Azorean species, namely the laurissilva and the uva da serra unique to the Azores. There are also subspecies of European shrubs such as the laurel, chestnut trees, heather and holly.

The Terra Nostra Park also holds the majestic outdoors Thermal Water Pool first built by Thomas Hickling in 1780 and enlarged in 1935. It is an enclosed pool of iron-rich thermal volcanic bubbling water at a temperature of about 109F (40 C) which offers the visitor a unique spa-like experience of immersion and relaxation.

Geologically, the nine islands forming the Azores archipelago comprise of a 20–36-million-year old plateau, holding 88 lakes and lagoons. The islands were created from a long history of active volcanism of which the caldera and the Furnas Lake stand today as live reminders of how the islands were formed. 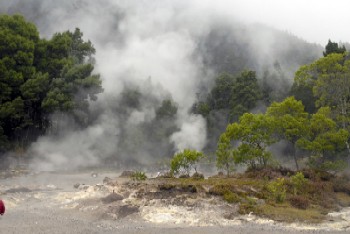 Fumaroles, geysers and a variety of thermal waters in the caldera of Furnas.

Of enormous beauty and bewilderment, besides the geysers and the many fumaroles and thermal water varieties, the Furnas caldera holds the azalea fringed Furnas Lake [Lagoa das Furnas] of exquisite beauty. The second largest on the island, the lake holds over one million cubic liters of water.

The area is part of the Volcanic Complex of Furnas comprising the Furnas Lake and a number of geysers, fumaroles and hot water springs. They offer the visitor a beautifully serene view of the lake next to the most daunting vision of volcanic activity steaming with boiling mud and hot magma.  A number of man-made holes were dug into the ground used by the local people and local restaurants to slow cook meals of which the Cozido das Furnas [Furnas boiled dinner] is the most famous.

To restore and preserve the ecosystem and the biodiversity of the Furnas Lake area, the nearby Furnas Monitoring and Research Center (CMIF) was created in 2011 on the south margin of the lake. Its mission is to clean the water basin, to restore the original habitat of the lake considered one of the major tourism attractions on the island. Monitored by the Center of Volcanology and Geological Risk Assessment of the University of the Azores, the facility is open to visitors.

(*) Carolina Matos, is the founder and editor of the Portuguese Portuguese American Journal online. From 1985 to 1995, she was the Editor–in-Chief for The Portuguese American Journal in print. From 1995 to 2010, she was a consultant for Lisbon based Luso-American Development Foundation (FLAD). She graduated with a Bachelor’s Degree in Liberal Arts and a Master’s Degree in English and Education from Brown University and holds a Doctorate in Education from Lesley University. She has been an adjunct professor at Lesley University where she has taught undergraduate and graduate courses. In 2004, Carolina Matos was honored with the Comenda da Ordem do Infante D. Henrique, presented by Jorge Sampaio, President of Portugal.