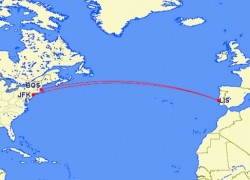 The codeshare will allow TAP Portugal to service 30 US-Lisbon non-stop flights a week, providing its customers access to the low-cost JetBlue network, the largest domestic airline at both airports. Both companies will operate new 271-seat Airbus A330 aircraft.

Codesharing is defined as an interline partnership where one carrier markets service and places its code on another carrier’s flights. This offers carriers an opportunity to provide service to destinations not in their route structure.

With this agreement TAP Portugal’s  customers will be able to access as many as 34 other North American destinations, including San Francisco, Los Angeles, Washington D.C, Chicago, Las Vegas, Orlando, Detroit, New Orleans, Savannah, San Juan, Richmond and Tampa, among others.

JetBlue is run by JetBlue Airways Corp., founded by David Neeleman, owner of Azul Linhas Aéreas Brasileiras SA., Brazil’s third-largest carrier. Azul is a partner of TAP Portugal through the Atlantic Gateway, a consortium owned by David Neeleman and Portuguese entrepreneur Humberto Pedrosa in partnership with the Government of Portugal.