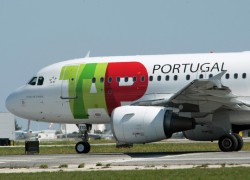 Unions representing 7,000 workers, at state-owned TAP Air Portugal, called a strike for March 21, 22 and 23 over concerns relating to budget reductions, layoffs and pay cuts between 3.5% and 10% in gross wages.

The strike, which will also affect Azores-based SATA airline, will the first to be backed by all eight unions representing TAP’s pilots and workers.

According to TAP, which operates about 180 daily flights, measures will be taken to minimize losses and reduce disruptions to passengers. It was not revealed how much traffic will be affected by the strike.

Similar stoppages called by TAP air traffic controllers, in April and May of last year, caused hundreds of flights to be canceled and/or rescheduled.

Last month, the national flag-carrier announced that it ended 2012 with a profit of €16 million, compared to €3.1 million last year.

Last December, Portugal postponed the privatization TAP Air Portugal alleging that the potential buyer didn’t meet the financial conditions.  The deal was part of the terms of multi-million Euro (€78 billion/$102 billion) bailout package Portugal had agreed, in 2011, with the IMF, the European Central Bank and its EU partners, aimed to reducing the national deficit.

March is going to be marked by additional transport strikes. The rail sector unions also announced a stoppage for March 6 and 7, while national train operator Comboios de Portugal (CP ) warned of further “serious disturbances and cancellations” of trains next week as a strike is expected to be called by sector unions.

In another development, Lisbon subway will be on strike the morning of Wednesday 20 March, against the company’s ‘privatization’, job losses and a lack of dialogue with the board, union representatives said Tuesday. The unions also complained of “a drastic reduction in maintenance and brutal staff cut-backs.”