Travel: TAP Air Portugal to offer flights between the United States and the Azores – Portugal 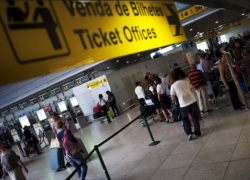 If confirmed, TAP would be competing directly with the Azores Airlines, a subsidiary of SATA Group on the routes between the Azores and the United States.

“We are thinking of having more flights to the Azores, perhaps creating routes from the Azores to the United States. We are thinking perhaps next summer. We are adding more aircraft to Porto and we can do other things in Madeira,” said Neeleman.

Expressing his concern regarding the lack of “airport capacity” in Lisbon, Needleman announced that TAP is buying bigger airplanes and considering alternative infrastructures.

He argued that “Lisbon has to have a capacity greater than 38 operations per hour,” and that considering the priorities of the Government and ANA Aeroportos de Portugal, the company that manages the Portuguese airports, ‘there must be a way to increase the capacity of the airport to bring more people,’ who will spend money there.

In a recent development, United Airlines has also announced a number of new seasonal flights between the United States and Europe for the coming year. The new routes include service from Newark, New Jersey, to Porto, Portugal.

The Azores Airlines just inaugurated the first of a six new A321neo aircraft to expand air connections between the Azores, the United States and mainland Portugal.

The second aircraft “Wonder” will be delivered at the end of the first quarter of 2018. The next four aircraft will be operational between 2019 and early 2021.

Azores Airlines has been offering regular air service between Boston and the Azores, and Lisbon and Porto mainland Portugal, with seasonal service from Providence (Rhode Island), Oakland (California), and Toronto (Canada). In addition, Azores Airlines offers connections to Madeira, Cape Verde and the Canary Islands and major Western European cities.

Azores Airlines, part of the SATA Group, has connected the United States with the Azores and mainland Portugal for more than 35 years.